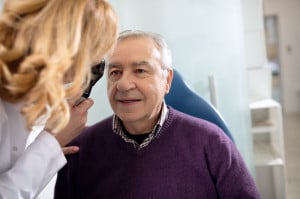 Did you know that glaucoma is the second leading cause of blindness in the world, according to the World Health Organization? It’s true.

It’s a group of eye diseases that causes damage to the eye’s optic nerve and can cause vision loss and blindness. The symptoms can start so slowly that they often go unnoticed in the early stages when glaucoma is the most treatable. In fact, it’s estimated that half of all Americans ages 40 and older with glaucoma don’t know they have it, according to the National Eye Institute.

The most common form of the disease, open-angle glaucoma, has virtually no symptoms. In addition, no pain is typically associated with the increased eye pressure caused by the disease. That’s why regular comprehensive eye exams are so important. At Utah Eye Centers, we screen for glaucoma and other eye issues.

The most common form of glaucoma, open-angle glaucoma, starts with a buildup of fluid that increases the pressure in one or both eyes. This buildup is caused by the slow clogging of the eye’s drainage canals. The pressure produced by this backup then damages the optic nerve, which helps transfer visual images to the brain. Glaucoma first starts affecting side vision and as it progresses, vision loss becomes more noticeable. This can then lead to tunnel vision, where you can only see straight ahead. If not controlled, glaucoma can lead to serious and even permanent vision loss.

If glaucoma is discovered in its early stages, pressure can be controlled through medication or surgery and the progression of the disease can be delayed. This is why it is always important to have a comprehensive eye exam at least every one to two years to check for glaucoma or any other eye issues. As you get older, an annual eye exam is a great idea.